Showing posts from June, 2011
Show all

A Thank You Note from Elana Afrika

In South Africa I have the best of all worlds. I mean ALL worlds. I have a great Shul and community. I'm independent, I own properties, have great relationships with my Entertainment and Media Clients, and best of all...I have an extremely supportive family in Cape Town. My life here is perfect. But, being in media and entertainment and, working with more than 6 charity projects hardly prepared me for the journey that I was going to have when I finally left for Israel. When writing in my diary on my bed one night last year August, I made a decision to make Israel the one place I have to visit before the end of 2011. I also made the decision that it won't just be a visit or travel like any tourist..I wanted something unique and chose Mayanot. I was born to Christian parents. I am Jewish and attend a Chabad shul and was ready for an experience that was different than the public life I had led up until then in South Africa where I host television and radio shows. I traded my lu
Post a Comment
Read more

The Peculiar Nature of the Jew

I have thought before about the fact that many Jews have this strange look and way about them. How terrible, how racist, how politically incorrect, I know. But let's be honest, you agree.  Even if you won’t admit it to your non-Jewish neighbors, even if you won’t write about it or let your mind ponder over it because you believe that something is wrong with that statement. But the truth is there is something so wrong and yet something so right about it, if only you look closely enough. You know what I’m saying- that slightly off, slightly kooky, quirky, way of being that typifies the Jew. Big nose, we might say; Semitic origins. Or neurotic tendencies; years of persecution and exile. Those being the reasons and the answers.  Prescriptive answers for a self-medicated generation. But maybe there’s something, something deeper, some other message that God’s sending to the Jews.  And this message, I believe, can be found in the Holy Land. Israel and Israelis are, in one word, ridiculous
Post a Comment
Read more

From Sinai to Cyberspace 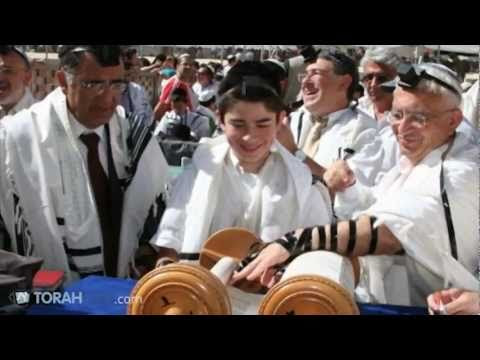 In honor of Shavuot, the Rohr Jewish Learning Institute and TorahCafé.com created a Webcast which highlights new and revolutionary programs offered to learn Torah. One of the 5 programs which was profiled was the Mayanot Women's Program. As an alumna of Mayanot, it was a true honor to take part in the creation of this Webcast. A huge thank you to Rabbi Levinger and current Mayanot WP students for being so accommodating! A little of the philosophy behind the Webcast.... The receiving of the Torah is not something that happened on one day, thousands of years ago; it is an ongoing process. Every year we are meant to receive the Torah anew in a deeper and more complete way. Yet, each year that has passed since Matan Torah has taken us further away from that original time it was given, a time when Torah seemed so real and present. Today we live in a world where many people see the Torah as an icon of history - distant from their modern life. My goal with this video was to bring out
Post a Comment
Read more

A Special Goodbye From Yoel

By Mayanot - June 01, 2011
Editor's note: Yoel Clark, a recent graduate, left recently from Mayanot and forgot to leave a letter for all of us.  So he emailed us one.  We thought we'd make it available here, as well as at the Men's Program, so everyone that met him can read his special goodbye. To the Rabbis, bocherim, shluchim, and staff of Mayanot, Thank you for everything. I'm sorry this letter is so late; perhaps it's because I feel like I never left. It is pointless to try and list the ways that all the people at this Yeshiva have completely reshaped my life, because they are so numerous I would go on for pages. I came here a year and a half ago one person, and came out someone new (and improved). So many guys grow into menschen here, people who have shared my experience of this gevaldik place. I can't say a bigger thank you, or give a bigger complement, than that. Advice for newcomers: Mayanot is THE place to learn and ask questions. Explore, learn from everyone you meet, and
3 comments
Read more
More posts
To learn more about Mayanot, check out our website at www.Mayanot.edu