Meet the couple setting up a religious home in Israel's North 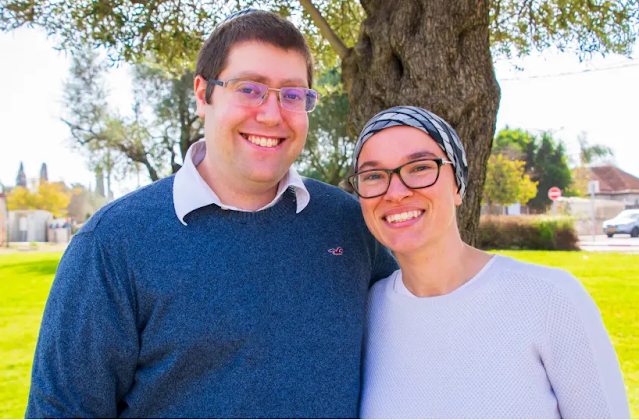 Alumnae Miri Birk, Shlucha at Cornell University connected an amazing student many years ago named Alyssa to Mayanot. Now Alyssa has recently been featured in the Jerusalem Post for building a home for many in Israel's north with her husband. We are so happy and proud of both her and her husband and of course thank Rebbetzin Birk for encouraging her to attend! May they continue to be blessed with much success.

The Cohns have made a good start in finding their feet in northern Israel.

The last year and a half were an eventful period for Alyssa and Thomas Cohn, partly due to the constraints of COVID-19.

During that period they made aliyah to the North with their toddler son (now two-and-a-half), without the assurance a pilot trip might have provided and without jobs awaiting them.

However, before leaving North Carolina, they engaged in networking to locate the right community and suitable accommodation and to put out feelers regarding employment.

They chose Migdal Ha’emek – a place they had never even visited – upon the recommendation of Netanel Afek, a leading light of its religious-Zionist group. Its proximity to the Yokne’am and Haifa technical centers was an advantage.

They also counted on the North being “more affordable, having a greener topography and a suburban feel. We didn’t want to live in a big city or a small settlement,” Thomas explains.

“We looked for an apartment online, and were relieved that it existed when we got here,” the chemical engineer says wryly. The almost empty apartment was in a new development near the town center. Then, in addition to setting up a household and starting jobs, 10 months ago the Cohns welcomed a second son.

Though they had to quarantine for their first two weeks in Israel, they were buoyed by help and encouragement from other members of the young community.

“We were blown away by the generosity of our new garin Torani community in Migdal Ha’emek,” Alyssa relates. “They lent us furniture to furnish our empty apartment, brought us groceries, made us welcome signs, and even organized a party for us in the parking lot of our apartment building while we attended from the balcony!”

Thomas and Alyssa, who both grew up in New Jersey, he in Oakhurst and she in South Brunswick, got engaged after Thomas’s graduation. Their relationship developed during their chemical engineering studies at Cornell University.

Eventually, both sought and found relevant work experience in Raleigh, North Carolina. As Alyssa explains, “My husband graduated in 2017 and found a job in North Carolina. I graduated the following year and followed him down to Raleigh. We got married that summer.”

Another factor that facilitated their aliyah was their no-frills lifestyle in Raleigh.

“It was a small, older and warm community,” Alyssa comments. “We joke that living in Raleigh made it easier to leave and make aliyah – as opposed to leaving somewhere close to our parents with all the amenities a young Jewish family could want. Both our sets of parents and most of my immediate family are still in New Jersey.

“Since early in our relationship, we planned to move to Israel,” Alyssa explains. “There’s never an easy time to make aliyah, but during the pandemic it was especially challenging. Now, in year two, things are starting to settle down. My husband works for NVIDIA, and I work remotely for a small olim-owned company called Mighty Guides. I’ve developed an interest in writing and editing.”

Her enterprising employer produces thought leadership e-books on different topics of influence for sponsoring companies, to which industry experts add their input. Alyssa, who works 25-30 hours a week along with caring for her baby at home, feels that her job provides her with some necessary flexibility. “Between the language barrier (I am still learning Hebrew) and two young kids to care for, I chose not to take on an engineering job at this time.”

Though Thomas had spoken to an NVIDIA recruiter in advance of their move, half a year passed until he was hired as a product engineer in its Yokne’am facility. Fortunately, the Cohns had allowed for this fallow period. His job involves evaluating electrical components that are critical to NVIDIA’s transceivers and fiber optic cables.

Though he confides that he “was preparing for a step back professionally,” Thomas wound up taking a step forward and appreciates the cordial workplace environment. If ever at a loss for words in Hebrew, he can revert to English and be understood.

Thomas managed to pick up a fair amount of Hebrew when he attended Jewish day schools, followed by two years in Yeshivat Har Etzion. He stayed on a second year because he appreciated the studies so much.

Alyssa, who went to public school, attended a Conservative synagogue and Hebrew school but did not learn much Hebrew. She spent time in Israel after her freshman year of college, half a year at the Mayanot Institute of Jewish Studies in Jerusalem. The second half year she joined an ecology program in Kibbutz Lotan, 40 minutes north of Eilat. Between the two courses, she acquired some basic Hebrew vocabulary.

During college she became more religious, often going to Friday night dinners at the Center for Jewish Living and attending Chabad programs. Since her aliyah she studies Hebrew online and also privately.

Regarding hobbies, Thomas collects coins enthusiastically, albeit on a small budget, and produces freelance articles for Coin World magazine – enhanced by some wifely editorial tweaks. He enjoys “the thrill of the hunt” when acquiring an intriguing coin, or one with a familiar historical context.

The Cohns have made a good start in finding their feet in northern Israel. Generally, they feel that their aliyah “was an amazing religious and historic opportunity to return to our homeland.” Furthermore, they are convinced that it is the best place to raise their children to be religious.