A Young Philosopher’s Search for Meaning 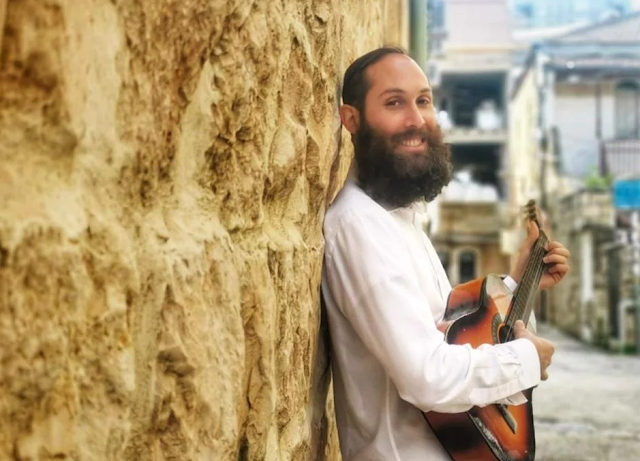 Mayanot in Jerusalem tells many stories. Amid the booming voices of discoursing rabbis coming from the study hall, and the aroma of Thursday’s bourekas wafting in from the kitchen, comes a new story of the quiet sound of scholarship of another kind. Michael Hurwitz, from Chicago, became the first student to defend a dissertation and be awarded a doctorate in philosophy while studying a higher order of wisdom at the yeshivah in the Holy Land.

Before this not-so-objective observer behind these words shares his role in the narrative, it’s important to hear from the scholar himself:

If not for the hardships of my degree, I would not have discovered Torah study or Chabad. If not for Torah study with Chabad, I would not have finished my degree. My journey with Chabad started during a low point in my graduate work. My doctoral dissertation began to unravel and my adviser suggested I give up. A few months prior, on a whim, I reached out to Rabbi Yoel Wolf, a Chabad emissary in Chicago. Something in me was missing. After studying weekly in Yoel’s home, eventually followed by Shabbos dinners and holiday celebrations, I made friends and mentors. Through Yoel, I met Dr. Dovid Imbo, a physics professor at my university, who gifted me a siddur (prayer book) and arranged my first Shabbos visit to the West Rogers Park neighborhood in Chicago’s North Side.

Amalek was the villain of that week’s Torah portion. Rabbi Baruch Hertz of B’nei Ruven told an apocryphal story about the British philosopher and professor of ethics Bertrand Russell. When accused of acting unethically, the thinker responded that when he taught mathematics, no one ever accused him of not being a triangle. The rabbi’s message was clear. Studying in a cold detached manner suffices for an academic, but a true student of Torah must take its lessons to heart, allowing it to penetrate all aspects of life. This devotion is precisely what Amalek sought to destroy. I felt like a divine message was delivered to me. I was pursuing a career in philosophy, and the first time I attended Shabbos prayers, a noted atheist is quoted from the rabbi’s pulpit. 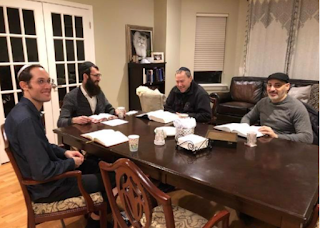 Hurwitz, left, at a Torah- study class at the home of Rabbi Yoel Wolf,
second from left, in the Rogers Park section of Chicago.

After Shabbos, with a renewed sense of calm, I decided to continue my graduate work. In the coming year, it was a decision I would make over and over again, with Chabad always there as a source of support and guidance. I continued my Torah study with Yoel - at his suggestion, I started reading Tanach (Hebrew Bible), giving myself the task of reading it from start to finish. At some point I began keeping Shabbos and attending a Chabad shul in the basement of a nursing home in my neighborhood. Through Dr. Imbo, I met Simcha and Gittel Kanter, and became their regular Shabbos lunch guest. They first planted the seed in me to attend Mayanot.

As I neared the end of my academic journey, Yoel and I visited the Rebbe’s gravesite. In the lobby, a video showed the leader explaining why King Hoshea, the last monarch of the northern kingdom of Israel, was punished. He tore down the barriers that previous kings had built to prevent the northern tribes from journeying to the Temple in Jerusalem. Despite his good intentions, Hoshea took away the Jewish people’s only valid excuse for not bringing sacrifices to the Temple in accordance with Torah law, which implicated him in the sin. I took the Rebbe’s words as a message of reassurance, with a gentle warning. My dissertation had been a major barrier for me that would soon come down. But that would invite new responsibilities. I emailed a completed dissertation to my defense committee.

Shortly thereafter, attending Mayanot became a real possibility. My apartment lease ended and my employer—Loyola University Chicago, where I was an instructor—moved to remote learning. When I mentioned these developments to Gittel, her emotion and excitement flowed into me. “Call Rabbi Shemtov at Mayanot right away.”

Still, I had no idea what to expect of yeshivah. I had no image even to put to the thought. I was worried I wouldn’t like it, and more concerned that I would. I didn’t know what the living arrangements would be, and neither did the yeshivah. Federal and state regulations were changing daily. My supportive family members were understandably concerned.

Sidebar: This is where the subjective narrator has to break the fourth wall.

I’m not a rabbi, and I barely play one on TV. I’m not someone who proselytizes, as I lack the moral confidence and surety required. And this is on matters within my expertise, let alone on matters about which I am not an expert. Curious people might ask for my opinion. I politely demure, and then they ask again. I hem, haw and offer referrals to experts. After being cornered, I offer some weak platitudes. They push further, and I finally offer feedback. Yes, I admit with defeat: “Chocolate ice-cream is indeed better than vanilla.”

When a person whom I just met asks me whether or not to study in yeshivah in Israel, to uproot his life and go to another country and environment, I am a fish out of water. Like a yeshivah bochur at NASA. Or a Jew in Divinity School. Only I kind of fit the bill of the latter. (My school, University of Chicago Divinity School, was founded as a Christian school but today has no sectarian affiliation.) If I had to choose between having dinner with a campus shaliach or a professor, I’d opt for the latter. (Except if they were professors of ethics.) 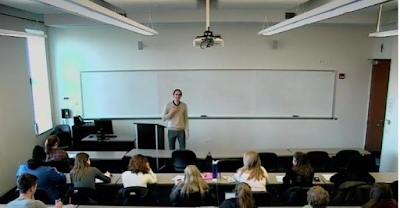 So I leaned into the unknown. I’m a grad student, and I had a classmate who talked extensively about his experiences and adventures learning at Mayanot. When I met Michael at an outdoor, distanced Thursday-night event, we started chatting. He was considering traveling to Israel and asked my opinion. That was Thursday, and he needed to make a decision by Monday. I don’t offer advice, but I am more than happy to get to know new people. Three days later, we met for a distanced coffee across the street from the Green Mill, a club made famous by its part-owner, Al Capone. (One of the earliest shluchim in the city.)

I couldn’t speak for the yeshivah experience, not having attended this particular one myself. But I had the knowledge and passion shared with me from a UChicago classmate, who had attended the Israel-based institution. He shared tales of his summer there, meeting rabbis and characters that ranged from Harvard grads to the homeless. My classmate’s Mayanot experience was fundamental in his spiritual journey.

I empathized with Michael’s passion for personal growth and intellectual stimulation. Michael and I spoke about the incredible timing of this all, and the long list of unanswerable questions. Through the heat, I expressed envy at his freedom to travel internationally, as the world was locked down. I shared my own mixed yeshivah experiences, and the feeling of alienation I often had in that kind of environment. We parted ways, without me having an idea if I made any sort of impact. 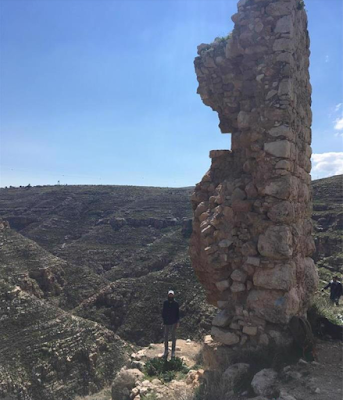 Hurwitz in the Judaean Hills during a Mayanot trip to Tekoa.

On the morning of my flight to Israel, I finished reading the final pages of Tanach, adding the siyum (completion) to the many chapters in my life.

Upon arriving at the Mayanot yeshivah, I knew I was in the right place. A few weeks later, around midnight Jerusalem time, my Yeshivah classroom became a war room. It was time to defend my dissertation. Several ‘do not disturb’ signs hung from my doorknob, a futile endeavor if there ever was one. I was armed, with a Tanach on my right side and a siddur on my left, like Moshe’s raised arms leading the Jewish people against Amalek. My strongest weapon was visible on the webcam: my yarmulke. I emerged victorious - a warrior: Dr. Hurwitz. Newly crowned, I grabbed a few hours of sleep in preparation for Rosh Hashanah. When word got around that I had completed my doctoral degree, there was no shortage of celebration. A new title and a new year. The experience was as triumphant as it was humbling.

As my journey continues, I am constantly reminded of the lesson I learned that Shabbos morning: Life is not a lecture, but a dialogue. 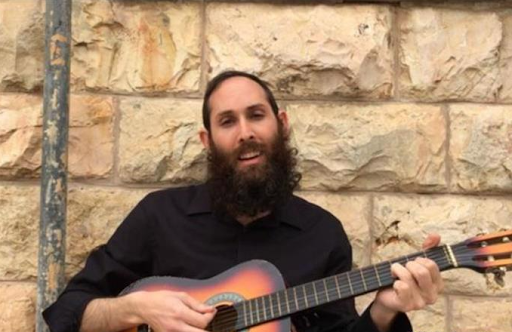 Upon arriving at the Mayanot yeshivah, Hurwitz says he knew he was in the right place (photo: Hayim Ashkenazi).