Wherever Life Leads: My Jewish Journey 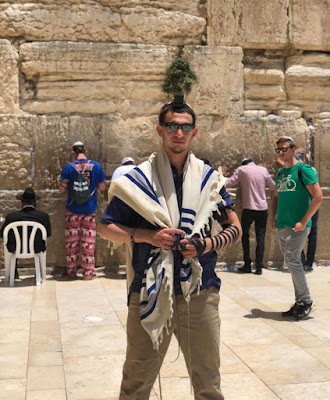 I was born in Boca Raton, Florida into a large Jewish community. Despite this, Judaism
was never at the forefront of my upbringing. For me, Judaism was like clothes that you wear every day. It was there but I didn’t pay much attention to the value it had. Although my grandparents were Orthodox, for most of their life, my parents did not continue all of the
traditions that they were brought up with. Instead, my parents valued other things and my father, who is a longtime marathon runner, introduced me to athletics from a young age.

Long before I knew it, I became an elite cross country and track runner in which everything I did was centered around running, somewhat like how one practices a religion, in relation to the dedication I had to the sport. I later went on to compete in NCAA division of cross country and track, after being a distinguished standout student-athlete in both middle school and high school. I attended the University of South Florida and competed for two years, when I suffered a devastating spinal cord injury that forever changed my life. Looking back now, G-d saw to it that I endured this injury so that I could return to my roots, at least that’s how I look at it now.

Following this injury, when I got out of the hospital, I felt completely lost as to what I was to do now. I felt running was my purpose, and when I could not run I did not know what to do with myself. After a brief period of self-discovery, I decided to focus on becoming more involved with extra curriculars on campus, instead of focusing on what I had lost. As a student on the pre-law route, majoring in political science, I thought that running for student government senate would be a great opportunity. I was successful in my pursuit for public office and before I knew it, I was one of 60 student senators responsible for the allocation of nearly $20 million per year.

Although this seemed to be the highlight of my professional endeavors, things took a completely different spin than I had expected. I came to understand how the political climate operated on my campus and for the first time in my life I came to realize that the world was not truly like the community in which I grew up in. I came to find that the majority of leaders on my campus were foreign students from particularly the Middle East who had a mission to promote BDS and hatred of Jews.

As an athlete, my entire life I was raised to never back down from a difficult situation. While with this situation I was expected and told to remain silent, to back down, and even had my life threatened; I persisted as the sole Jewish senator, to speak out against the lies several different organizations on my campus were spreading.

Again, growing up I did not feel any significant connection to Israel nor to Judaism, in a meaningful way, but it was not until I was told, ‘you can’t be who you are’, that the eternal fire inside of me came alive. To summarize this experience, it was negative in the short term, but in the long term nothing but blessings seem to come from this experience.

I was introduced to Rabbi Pinny Backman who is the (Shliach) Chabad emissary for the Chabad at USF. I vividly recall our first introduction in his home, I wrapped tefillin for the first time in many years. It was a feeling that I can’t put into words, but our relationship only blossomed from there. I would continue to be a part of Chabad on campus from both an activist perspective, attending events such as AIPAC. However, I also began to become more curious regarding all the religious components I missed out on growing up. I participated in Sinai Scholars as well as Rabbi Pinny’s Israel history course. These experiences continued to enable my growth as a young Jew. I attended Shabbat dinners with his family and other Chabad students, regularly, as well as nearly all the holidays, and I always felt at home and very welcome. 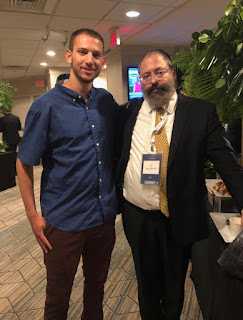 (Spencer, on the left, with Rabbi YYJacobson,
at the Sinai Scholars retreat)

In 2018, I went on a 10 day Birthright Israel: Mayanot trip for the first time and decided to do the special Israeli Innovation and Entrepreneurship focused trip (Bus #187!) that was being offered at the time. On this experience, I thought it was possible that maybe I was being biased and perhaps there was some injustices in Israel, considering everything I had heard on my campus. However, this trip reaffirmed my desire to become more observant and return to my roots, and learn more about Israel.

When I returned to my campus, after the trip, I continued to see such lies being spread about Israel, including an apartheid wall all across the student union building in November 2018. Despite this, I continued to persist in my growth and with each day I took on something new to learn or do, in regards to my Judaism.

In the summer of 2019, I embarked on my second journey to Israel on a program that encompasses yeshiva learning, on a part time basis, along with a full-time internship at Hebrew University. This experience connected me to G-d in ways that nothing has ever done before. I also began to understand what yeshiva was and decided that this is what I wanted to experience more fully.

Immediately following my internship program, I remained in Israel and joined the summer
program at the Mayanot Men’s Learning Program. This institution has changed my life in unbelievable ways thus far and even after only a short six weeks of being here, I have far exceeded any goals I set for myself. I recently pondered lessons from Rabbi Moshe Scheiner from Palm Beach, Florida who spoke at a farbrengen Mayanot hosted. His story essentially came down to the fact that the decisions one makes is not just about himself but can perpetuate and create countless positive ripples for years to come. This is something I feel very connected to.

I am grateful that despite my parents raising me reform that they kept the traditions they did such as marrying Jewish, going to shul, and celebrating the holidays with our family. My decision to attend yeshiva and move to Israel will affect generations to come in a multitude of ways. I am very grateful for the opportunities G-d has blessed me with and I can only see the events that have happened to me, as evidence for me to continue to learn and grow in my Judaism. This opportunity wouldn’t be possible without the amazing staff at Mayanot and the support of my family and peers. So I want to send out a big thank you to them all! I can’t wait to see what the New Year brings and continue this journey at Mayanot.