Eliyahu Dovid (Elliot) Friedman may had only been 19 years old, but for someone so young, he already knew what he wanted out of life! In fact, by the time the Florida native arrived at Mayanot in May 2014, he knew that Judaism and Jewish thought were central to who he was and that he needed to learn everything he could about them as soon as possible.

Eliyahu sayed that it made his parents “more than a bit nervous” when he told them he needed to be in a yeshiva ... in Israel. His is a home where synagogue attendance could be measured by holidays, and his was a school where there were few other Jewish students. What’s more, none of his three siblings had yet hungered for a religious immersion.
“But in middle school when a kid at school asked, ‘What do you believe in?’ Why don’t you believe in Jesus? You killed him,’ and I had no idea what to say, I knew I needed to find out more,” he said.

By high school he was trying on agnostic and even atheistic world views, and doing plenty of reading and writing on the subject, “I had concluded simply that G-d does not exist but one night I said out loud, “I want to believe in You.” One thing he had learned, though, was that a number of his relatives had been killed in the Holocaust, a fact that made a profound and lingering impression on him. “I realized that I need to find some answers so I started to dig.”

Eliyahu began researching late into the night, everything from prophecy to the relationship between science and religion and that’s when he began entertaining thoughts of becoming a rabbi. A year later when a Chabad rabbi offered to have a class with him via Skype, he readily accepted.

It was a connection that’s spanned the years and as soon as he arrived at college he quickly made contact with the University of Central Florida's Chabad Rabbi, Rabbi Chaim Lipskier, and there his learning intensified. Before long the former “theater kid” was keeping Shabbat and his plans to become a rabbi began to make even more sense to him. Which is when he was asked: “What would you say if I could help send you to yeshiva?”

What began as a three-week stay at Mayanot has certainly grown too, Eliyahu extended his stay another six months. “There is so much to learn, it’s amazing,” he says. “Mind-expanding Chassidis, free will vs. determinism, how a spiritual G-d effects a physical world, the nature of good and evil, the hiddenness of G-d and the Holocaust. One of the things I’ve learned is that being Jewish is being able to hear G-d’s Voice behind the silence.”

Eliyahu also says that Mayanot’s teachers have made this world come alive for him. “These are the greatest minds I’ve ever known. They actually have answers to your toughest questions, the ones you’ve always wanted to ask.” 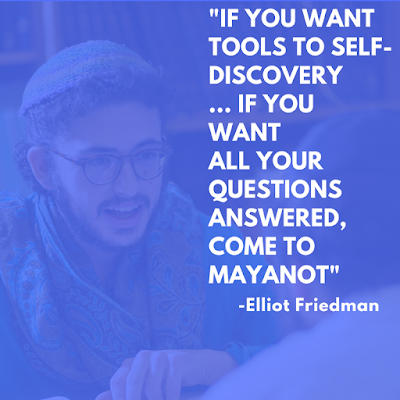 But perhaps the greatest lesson he’s learnt at Mayanot is that “everything isn’t the way I’d assumed, nor the way it seems. Basically what I say to the people back home is: ‘If you want tools to self-discovery, to discover G-d and His world, if you want the kind of deep friendships you won’t find anywhere else, if you want all your questions answered, come to Mayanot. But don’t expect it to be easy. If you want to be comfortable and not question your assumptions or take risks, don’t come here, but if you want to grow in every way, Mayanot definitely is the place.”