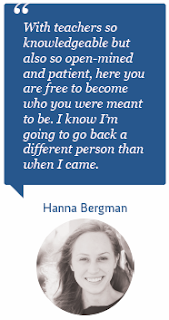 1.      It was only after her mother embarked on a spiritual journey that Hanna Bergman learned about Judaism, not because her father is a Holocaust survivor from Czechoslovakia.

In fact Hanna was already 13 when she learned of her father’s past. That’s when her Christian-born mother’s wide-reaching religious search ultimately led the family to the door of the local synagogue. One Friday afternoon in 1997, Hanna returned from school to a novel sight. “The table was all in white, filled with food and candle holders. My mother sat us down and said, ‘We’re Jewish now. We’re going to start keeping Shabbat. We don’t use electricity on that day and we’re going to keep kosher.’ I had to phone my friend and tell her I wouldn’t be going out with her that night.”

After an intensive year of her mother reading and learning, the next year the entire family converted. “It made my father very happy,” Hanna recalls. And that’s when they learned his whole story. Having lost his father in the camps, he had been unable to speak of his experiences. “He’d get upset when we’d ask him questions so we didn’t really probe too much”.

Hanna decided to live her dream – and her parents’ -- with her first visit to Israel two years ago, to participate in the Mayanot women’s program for three months. (She follows on the heels of her brother, who made aliyah and served in the IDF six years ago).

In a voice that revealed her South African roots, having also spent many years in her mother’s native country of Namibia, Hanna described her own journey, including the pivotal moment when a Cape Town rabbi told her about the Mayanot program. “I only knew that I wanted to increase my Yiddishkeit in Israel and the name Mayanot kept coming up again and again.” 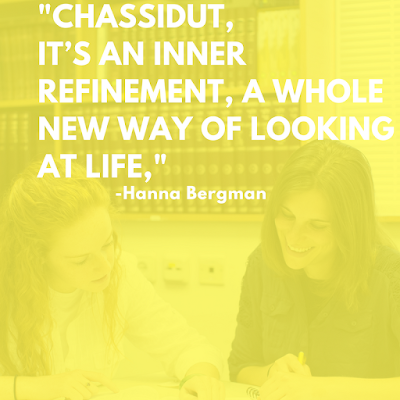 Hanna’s favorite class was “Halacha,” she shared without hesitation. “I’m a person who loves structure, so I love Jewish law. It’s about committing to Hashem in definite ways. I also enjoy Chassidut; it’s an inner refinement, a whole new way of looking at life, and it’s also amazing.” These are not things most of us are able to think about in our ordinary lives, she added. “When you learn how to serve G-d with your whole self, it puts your ego in the right proportion and moves you out of ruts you’re stuck in. With teachers so knowledgeable but also so open-mined and patient, here you are free to become who you were meant to be."

If you are interested in being featured, or sending us a testimonial about your experience at Mayanot, please email us at: [email protected]