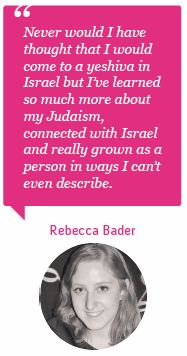 For Rebecca Bader, coming to Israel to learn only became real for her, after a Mayanot representative visited the Chabad for her school, the University of Hartford a few years ago, where she and her, then fiancé, now husband Eric Maurer were regulars. The rabbi suggested that she and Eric might both want to learn at the women’s and men’s programs (respectively), so they could connect more deeply with Judaism – and with each other.

“It’s so nice to be both on the same page,” says Becca, who spent many of her growing-up years in Alabama but whose family lives in Maryland. “Never would I have thought that I would come to a yeshiva in Israel but I’ve learned so much more about my Judaism, connected with Israel and really grown as a person in ways I can’t even describe.”

Before she arrived, Becca was “a little nervous that the ideas would be radical, but Mayanot brings in so many aspects; we hear from women from all the different sects and the teachers come from all different backgrounds and when they tell us their stories, they’re so honest and open. They also know so much that any question you ask they either know the answer or they can help you figure it out.” 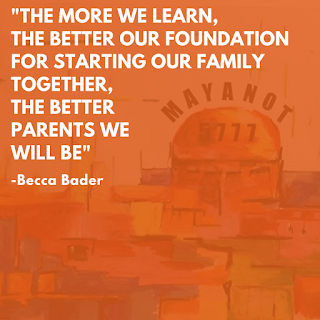 Put together, their experience is bound to strengthen their marriage, says Becca. “We always knew we wanted to raise Jewish children, but the more we learn, the better our foundation for starting our family together, the better parents we will be. And, being in similar programs, we’re now able to really talk about how we want to raise our children with Halacha (Jewish Law), with Shabbat, something that’s going to be so much easier after our learning about it here.”

Becca says she’s also grateful to learn other aspects of practical Halacha (Jewish Law), including complex kashrut (Kosher) issues, Shabbat observance and what to look for when shopping for mezuzah scrolls for the door post. “I knew we were going to be more aware after this experience,” she says.

Another goal the couple had, was taking back to American with them: to share with others some of what they had been inspired with at Mayanot. “We were hosted so much that it’s brought us closer to Shabbat and made us want to host other young couples at our table,” says Becca, who before she came to Mayanot, was a teacher at a Boston-area Jewish preschool. “You develop such close bonds in Mayanot to all the other girls,” she adds. “The truth is besides the learning (Topics in Talmud being her favorite class) and just being in Israel, you learn so much from each other. Everyone comes from a different background, but they’re all so open. Learning things like: Rabbi Akiva saw just the good in everything and everyone and that is certainly true at Mayanot.

And, though part of her wanted to stay  into the next school year, ignoring the call of job and graduate school, Becca knew she would be back. “But next time,” she added with a smile, “it would be as a married couple.” 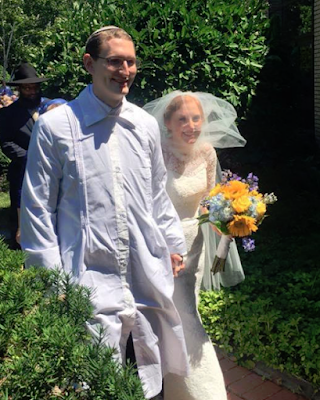