You'll never guess who made Aliyah

We are very proud of our Alum who recently made aliyah and was featured on Jerusalemvillage.org

Shayna Driscoll, originally from Brooklyn and now in ulpan & living in Jerusalem, attended Mayanot in 2012 and made aliyah in 2016. 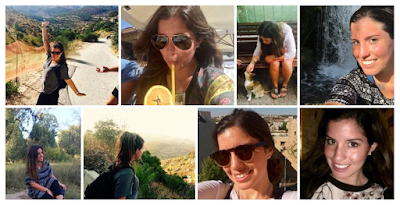 Shayna grew up as a self-proclaimed “Rosh Hashanah Jew”– reformed and secular, with Israel totally off her radar. That changed after coming on Birthright and returning for seminary at Mayanot, but Shayna still wanted to “fit the mold”– to get a job in New York, pay off her student loans, and eventually settle down. But that was not the path her life took. Shayna made aliyah this July, leaving a great job at the United Jewish Federation of New York as a Development Associate and her beloved parents, who are now reluctant empty nesters. Shayna chose to go against the grain and fight for her long-held desire to move to Israel. Now, Shayna is focusing on her Hebrew learning at Ulpan Etzion in Armon Hanetziv, making life-long friends, and soaking up Jerusalem’s energy, which she calls “ very much her vibe.”

Israel was not on Shayna’s radar until she began college at Binghamton University, where her friend convinced her to go to Chabad for some free food before heading to the bars. There, she learned about Judaism and about Israel. She signed up for Birthright not long after and began to learn more about Hasbara, Judaism from a cultural and spiritual perspective, and eventually, from a religious perspective. After her Birthright program, she left Israel “kicking and screaming at Ben Gurion Airport,” not wanting to leave. “The madricha told me that she knew my type and knew I’d be back.” The madricha was right– Shayna came back to Israel nearly every summer following on free trips, “obsessed” with Israel. After she graduated from college, she came back to study at Mayanot’s Women's Learning Program. She hoped to do the army and get a masters, but decided against it because she felt it wasn’t was she “should do”– she chose, perhaps for the last time, to “fit the mold” by getting a job and paying off her student loans. When she got a prestigious job with the Jewish Federation’s Wall Street Division, she found meaning in her position and gracefully took on hefty responsibilities, including managing a Wall Street dinner where $28 million was fundraised, with a whopping 1,700 guests who she seated and managed. At her job, Shayna was working with millionaires and billionaires and was following the path that her UJA mentors took to reach their coveted positions. But Shayna couldn’t ignore the fact that she felt something was missing.
At a Birthright fellowship conference in Chicago, her feelings came to a head–she found herself emotional after hearing from Israeli speakers. “I want to be these Israelis,” she recollected. “I want to be the one working for a Jewish organization, flying to America and teaching others about Israel, not vice versa.” When Shayna called her mom, who wanted to keep her only child nearby, she protested, “Shayna, you have your aliyah voice on again!” But this voice only intensified a few months later when the פיגועים began almost exactly one year ago. “It was a turning point for me when Ezra Schwartz died. I felt like, what the heck am I doing here [in the U.S.]? Israel is really important to me! Where do I want to be if I die tomorrow? Do I want to be in a cubicle on Park Avenue?” In a last ditch effort to follow the “normal path,” she applied to NYU and left to staff Birthright on the same day, but within 24 hours of being back in Israel, she made up her mind. “I even began telling people on the bus. I wrote a letter to myself then to make sure I wouldn’t go back on my choice.”

Unlike for many olim chadashim, for Shayna, the hardest part of her aliyah process didn’t happen in Israel– rather, it was telling her parents that she was moving. As an only child, it was “horrible” telling her parents. In January, she told her mom. In April, she told her dad. In July, she made the move. “My dad didn’t call me for four months after I told him. It was the worst time of my life,” said Shayna. Her dad began to understand once terrorism around the world increased. “I think it put it in perspective for him that I wanna be where I wanna be,” and Israel isn’t necessarily more dangerous than any other place. In fact, Shayna feels the most safe in Israel where “safety is not scary or intimidating, but there is a subtle feeling of security.” And anyway, physical danger isn’t as scary to Shayna as other dangers. While she spoke about ulpan friends from Turkey and France who couldn’t wear kippot in the street or had to sneak in Kosher meat from the butcher, Shayna said her motivations for aliyah include an escape of ideological and emotional nature more so than an escape for safety reasons. “Americans are fleeing from a sense of complacency and apathy towards Judaism. To me, that is scarier than ISIS, because you can’t bomb apathy.” The result, for her, means she doesn’t have to struggle to identify Jewishly when living in the Jewish State. “Here, you can be who you are. You can wear pants and cover your hair if you want. You can really be whatever you want.”

Even with the hardship of skeptical parents, Shayna feels she made the right decision. She loves ulpan, where she has found “the most incredible friends” in what she calls a “very soft landing.” Shayna loves walking around, looking at old street signs, finding new restaurants, being outdoors, and exploring nature. To her, Jerusalem is the “heart of Israel” and says she “needs to be in the heart,” even though most of her friends live in Tel Aviv. “I love history and I am a spiritual person so I love the energy here in Jerusalem. Sometimes if I’m bored, I’ll just go to the kotel,” she said, laughing. Her Hebrew learning is also coming along. Even though it’s easy to speak English outside of Ulpan, she has found ways to practice, such as “learning all the names for the vegetables from the guy at Jachnun Bar in the shuk- I go there all the time,” she tells. “After all, I didn’t move to Israel to live in the upper west side!

In terms of struggles, there are many, as always. She cites the language as the biggest challenge and resulting in funny mistakes like when she answered “שתויות רק” instead of “שתיות רק”” when asking if she wanted anything else at Aroma. There are also those not so funny mistakes, like paying for 20 24-hour bus tickets instead of 20 tickets on her Rav Kav because she asked for “פעמים עשרים” instead of “נסיעות עשרים.” While she is “very much a New Yorker” and “doesn’t let Israelis walk all over her,” her strategy for getting by in Hebrew speaking environments is to just say, “okay, okay.”

Now is another critical time for Shayna, who is beginning to think about what is next for her: nonprofit work or starting something completely new. But one thing is certain– like many olim have proven before her, with a mix of her American positive outlook and Israeli don’t-take-no-for-an-answer grit, Shayna’s future is bright in Jerusalem.

We wish you much success and nachas here in Jerusalem, Shayna, and hope you will come back and visit us from time to time!