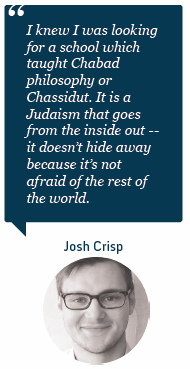 Joshua Crisp’s first real introduction to Judaism was the day he walked into the Chabad House at his school, the University of Sussex in England. He’s not sure exactly just what pulled him in, but once he got the taste of Jewish life and learning, he found himself wanting more.
A junior investment analyst with a degree in economics and finance, Joshua was raised with some sense of his own identity as a Jew but, he said, not much. “Growing up I didn’t know much about Judaism,” he noted. Until he began to “get inspired” at the British South East Coast Universities Chabad House. “Even though I was a real beginner, for some reason I wasn’t intimidated or overwhelmed, just interested, very interested”.
That was only one and a half years before he decided to attend the Mayanot Men’s Learning Program, because, although he enjoyed the learning at the campus Chabad, he knew that, after graduation he’d be ready to pick up the pace of his Jewish journey.  That’s when he discovered the Mayanot website online www.mayanot.edu, “I knew I was looking for a Chabad yeshiva for the Chabad philosophy and the Chassidut.
Chabad is Judaism that goes from the inside out -- it doesn’t hide away because it’s not afraid of the rest of the world. So the place just sounded like a really good fit for me.”
At 21 years old, Joshua was immersed in the intensity of the Mayanot learning environment  and he summed it up by saying: “There’s a lot of joy here, I’ve learnt so much so fast, but it’s also a lot of hard work.” One thing he did not completely expect, he said, was the dramatic “character development” that goes hand-in-hand with the intellectual learning at Mayanot. “Judaism is not a walk in the park,” Joshua beamed. “To be a Jew means to be always working on yourself.” 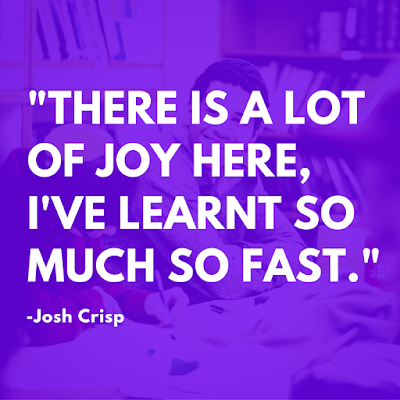 And, back in England Joshua has parents who, though they are “amazing people,” tend to worry. They worry about international antisemitism, “especially given the non-Jewish environment I grew up, but I see it as my mitzvah (good deed) to be a strong Jew in the world, to show the world what a Jew can be.”
“Mayanot has prepared me for that,” Joshua adds. “It gave me and the bunch of like-minded guys, who were with me, the skills we all needed by steeping us in Yiddishkeit, and helping us build a stronger identity.” Joshua said he knows that, “if you wear a yarmulke (traditional head covering) in the workplace you need to know enough to answer questions. Mayanot arms you with that knowledge, making you a good representative of the Jewish people. That’s how Chabad changes the world.”