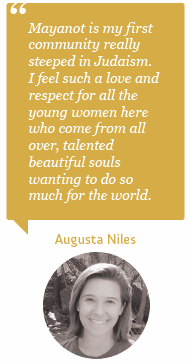 Since she was little, Augusta Niles has always been a person who’s hungered to know “the why and the how of the world-- that’s why I went into engineering, to figure out exactly how things work.” That’s also why many years later, the Vermont native landed herself in Jerusalem, for the opportunity to learn at Mayanot.

“I grew up with very little religion in my home, and I didn’t know where to turn,” says Augusta, who was in the midst of her conversion process. One day she picked up a copy of Harold Kushner’s classic, “To Life!” and following that, “A Complete Idiot’s Guide to Understanding Judaism.” Before long she was listening to shiurim online, test-driving Shabbat and every week adding more observances and attending services at the Harvard Chabad and Hillel, all the while taking her Master’s degree in engineering and business at MIT. At Chabad, she met two women, both Mayanot alumnae, who told her that Mayanot is a “good place to grow into your Jewish skin.”

So after graduation, Augusta told her future employers at Amazon in Seattle that she wouldn’t see them till the fall, because she had something very important to do first: learn everything she could about what it is to be a Jew. “I remember how Rabbi Wineberg came to the Chabad and spoke about real freedom as not being free to do whatever you want at the moment but the freedom to connect with our Creator. He told us that that is the greatest joy in life.”

Rabbi Shneur Wineberg, who regularly recruits at Harvard University, says, "Mayanot offers a chance for personal investment, something that is regularly taken for granted in today's society. Careers need investing in, but we ourselves also need an investment. At Mayanot, students get a chance to grow within themselves, learn about their own lives purpose, ask the questions that aren't addressed in everyday life but which can make a huge difference in a person’s overall fulfillment." 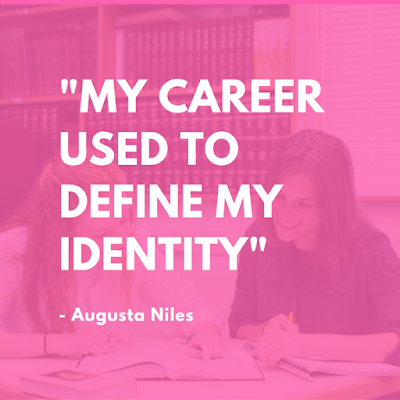 “My career used to define my identity”, Augusta said. “But I could see how much I had to learn about Judaism and also how much I needed a supportive community around me. All of a sudden,” she continued, “I began to realize that these things were not just more important theoretically, but that it was vital to take action and to devote real time to growing myself.”

All of which she felt she found at Mayanot. In addition to the fundamental Jewish skills she’d been seeking, Augusta surprised herself with how quickly she learnt Hebrew. “It’s incredible that a whole new language can come together in just a few weeks,” she noted. “My memory’s not very good but for some reason when it comes to Judaism, everything just sticks.” She also calls Mayanot “my first community really steeped in Judaism. I feel such a love and respect for all the girls here who come from all over, talented beautiful souls wanting to do so much for the world.” And, she added, she “didn’t realize until I came to Mayanot that if you truly immerse yourself and take the time to let the learning seep into you, you are transformed. I can see the Hand of G-d in my life on a daily basis here. I hope that, even after I leave, I can see everyone who approaches me with that same kind of baseless love.”

Help us create more stories like this one.
Spread the word, Mayanot will be raising $2M starting on Dec 21st, ONE DAY ONLY!
Every dollar is x4! Lets Build Mayanot!
www.Causematch.com/Mayanot
#LetsBuildIt