A Needle in a Haystack: Finding a Bone Marrow Donor 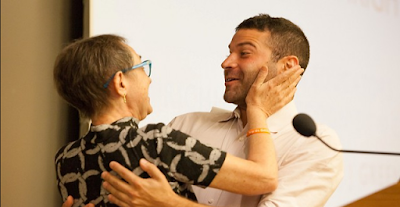 We recently published an article on our blog about a brave young man, Taylor Crampton, who was on a Birthright Israel: Mayanot trip in 2009 and joined the Gift of Life Bone Marrow Registry and was called on to save a life. On February 8, 2016, Taylor donated bone marrow to a 44 year old female with Severe Aplastic Anemia. When asked if he would like to meet his recipient, he said, “if ever she was up to it, it would be my pleasure and honor to meet her”. Unfortunatly, most donors don’t get the chance to meet the recipients of their marrow donation.

We, at Mayanot, had no idea that so soon after we published that article, we would have the opportunity to witness a donor from another Mayanot trip and his marrow recipient, meet for the first time here in Jerusalem.

At the recent Birthright Israel Seminar, held at the Tel Aviv Stock Exchange this past October, a recognition seminar took place in memory of JJ Greenberg. Gift of Life gave a presentation with the intention of encouraging tour educators to develop a greater awareness and become more involved, as well as help more participants get into the registry. The highlight of the event was that the organizers flew in a donor from the U.S. to meet with the recipient of his marrow transplant, for the first time. 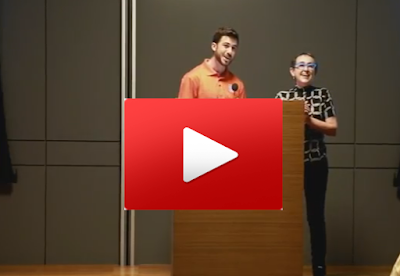 Etty Barzelai, a 57 year old women from Ramat Aviv, a wife & mother,  practicing lawyer and trained anesthesiologist, was diagnosed on Feb 20th, 2013 with acute leukemia, and as she says, “I was reborn on the 1st of April 2014 when I received my bone marrow transplant”.

Peter Schottenfels, was on a Birthright Israel: Mayanot trip a few years ago and at a Birthright Mega Event at the Sultans Pool, in Jerusalem, there was an opportunity for participants to join the Bone Marrow Registry and potentially save a life. Peter decided to get his cheek swabbed!

After finally meeting her hero, Etty proudly stated, “I got a second chance at life, there are not many opportunities like this during our lifetimes and I am grateful to all the generous people who enabled it. The wonderful people of Gift of Life and of Birthright Israel who are doing a holy job, in my opinion. They are responsible for these amazing initiatives; thank you does not begin to express my gratitude”.

Jay Feinberg, founder of the Gift of Life Bone Marrow Registry, who is a 21 year recipient of a bone marrow donation himself, told of how he began this life saving initiative.

He shared that when he was diagnosed, he was told by his doctors that he had no chance of receiving a transplant because, “he was Jewish.” It was explained to him that because genetic matches are best found with people of similar ethnic backgrounds, and there just weren’t many Jews in the global registry. It would be like “finding a needle in a haystack” for him to find his match.

Thank G-d he decided not to give up and began his 4 year search, running drives throughout the United States. Not only did Jay find his match, but his courage and can-do attitude initiated a project that has since saved countless lives, including Etty’s.

Charles Brofman, founder of Birthright Israel, saw an opportunity to present participants with a way to give back for the gift that they were given, of experiencing Israel. As a way to instill Jewish values, a sense of community and shared responsibility, as well as the occasion to perform this incredible mitzvah of Pikuach Nefesh (saving a life) this partnership began, over ten years ago and will hopefully continue for many years to come.

Rabbi Shlomo Gestetner, Dean of the Mayanot Institute of Jewish Studies commented, “There is no question that this project is priority number one for our groups. As the Talmud states, whoever saves one life, it’s as if they have saved an entire world”.

Danny Sack, director of the Mayanot Birthright division, and Shmulik Israel of Jewish Journey, under the leadership of Arnon Katz, have been a driving force, pulling this initiative together over the years and continuing to make this opportunity a part of the Mayanot Israel program.

The same way Jay Feinberg and Etty Barzelai were hoping for a miracle to find their matches. Now there is someone else that is in the same situation and needs our help. Adam is a husband and father of three and has yet to find his match. We are doing all we can to give our participants an opportunity to join the registry but if you are still wondering if you should join, we hope this moving video and compelling story has helped you realize that you too can save a life, to find out how, click here.
#Hope4Adam 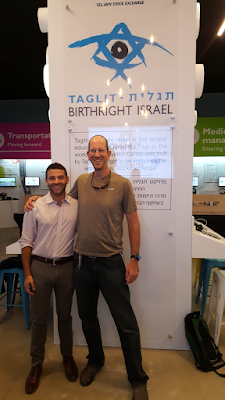 Mayanot is a proud partner of Gift of Life
#SavingLivesTogether www.mayanot.edu