Revealing the Light Through Chassidus 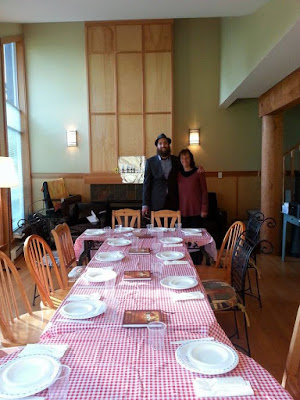 I have worked as a psychotherapist for almost 30 years in a holistic rehabilitation setting helping patients with devastating brain injuries regain their independence, meaning in life, and a “new normal.”  I have journeyed with many people enduring unbearable psychic pain using my formal education and clinical experience to guide me.  Over the past four years, I have been introduced to the concepts of Chassidus, which have so greatly enriched and clarified my professional mission - namely that which is stated in the Torah during the first day of Creation (Bereishit 1:3), "Yehi ohr."  This is generally translated as "Let there be light", but should be read as “It should become light” (Tzvi Freeman, Chabad.org).  Growing up Jewish, but with a secular mindset, I thought life's events were "random."  Yet instinctively, I've always wanted to catalyze the healing process.  Thanks to Chassidus, I now understand that through the power of Divine Providence, I can best "reveal the light in places of darkness."

One of the most far reaching innovations of Chassidus is its understanding of "Divine Providence" (Hashgacha Pratit), which refers to how G-d supervises and directs every detail of creation (HaYom Yom 29 Sivan). It is what brought my son from the beaches of Miami to Mayanot Yeshiva in Israel almost four years ago.  Divine Providence brought me and my husband to Israel in 5772 and 5773.  It couldn't be "chance" that we met Rabbi Sholom Brodt who had taught my husband 40 years earlier and was instrumental in furthering his Jewish education at a juncture where this was in jeopardy.  Now through Divine Providence, this rabbi and my son share many hours studying Torah in Jerusalem.  It couldn't be "coincidence" that I would meet three students from Winnipeg at Rabbi Yossi Witkes' home, one of whom was my cousin in-law’s son.  Most importantly, I was beginning to see that there was a Divine purpose for me to bring more light to my patients’ lives.  For example, two core principles of structure in life and work we strive to embed in our rehabilitation approach were already addressed by the Lubavitcher Rebbe 40 years ago when he stated “I believe the best help that can be given to your son...is to get him to work and that he would get used to a routine and orderly life” (Letter from 12th Nissan, 5734).

In Israel, I began to see how others reveal light in places of darkness through the power of Divine Providence.  While at a Shabbos meal, I was profoundly moved by Rabbi Yossi Swerdlov and his wife Hindel’s story of their daughter’s tragic death and how they combat the darkness through the donation of children's books to Shula’s Library (www.shulaslibrary.com).   Later, we visited an amazing kibbutz in the Galilee called Kishorit, founded by parents of individuals with special needs.  Lives are brightened and enlightened through socialization, collaboration, and working in an integrated community.  I was struck by how many of the principles were akin to where I work – a therapeutic milieu founded on nurturance and rebuilding purposeful and meaningful lives. Upon my return, I gave a PowerPoint presentation to my program’s staff about Kishorit’s philosophy – the common bonds were so uplifting and soul nourishing.  I then launched a strategic plan to intensify our rehabilitation efforts.  In my eyes, those experiences emphasize how "Your essential self lies in an inseverable bond with the Source of Light.  And from there it extends a glimmer of itself below to illuminate the darkness" (Tzvi Freeman, chabad.org).

After returning from my trip to Israel, I encountered tumult at work. As a team leader, I was experiencing inexplicable and unprecedented negativism.  In 25 years of team cohesion and positivity, this was debilitating and heart breaking.  I was thrown into an existential funk, questioning myself, my life’s work, and my purpose.  I personalized the enmity and seriously toyed with leaving the institute, feeling overpowered and overwhelmed. "When you come to a place that seems outside of G-d's realm, too coarse for light to enter, and you want to run away - know that there is no place outside of G-d, and rejoice in your task of uncovering Him there" (Tzvi Freeman, chabad.org).

I knew I needed spiritual guidance and a way to make sense of my adversity.  I gravitated to Chassidic teachings and the concept of "good versus evil."  The quote from the previous Lubavitcher Rebbe "you don't beat darkness with a stick.  You add light" inspired me to focus on positive change rather than embitterment.  My son helped by introducing me to the book “Toward a Meaningful Life” by Simon Jacobson (2004).  Through Divine Providence, we had already received a copy through a Purim Shalach Manot package given by Chabad of Scottsdale.  I began to read portions of the book every morning before going to work.  I derived huge solace from concepts such as facing fear and anxiety; viewing pain and suffering as seeds of growth; and the true meaning of work and productivity.  With renewed courage, I took the necessary steps to reconfigure the team, from which emerged even stronger and more compassionate and devoted therapists.  As the Lubavitcher Rebbe said "evil is not a thing or force, but merely the absence or concealment of good.  One need not 'defeat' the evil in the world, one need only bring to light its inherent goodness."

I desired to add more light at work to lessen others’ darkness.  One day I was meeting with families whose loved ones had sustained brain injuries.  They were lamenting about the recent Sandy Hook school tragedy, which refilled their deep wells of sorrow.  I was overcome by their pain as they tearfully and woefully recounted the circumstances of their loved one's brain injuries - horrific accidents and devastating losses. They seemed inconsolable.  Earlier that week, I had been speaking with my son about the tragedies of life, and he reminded me that the Lubavitcher Rebbe said "where light is, darkness is not.  A thimbleful of light will therefore banish a roomful of darkness."  I shared this sentiment with the families; there was a palpable pause in their reflections; incredibly the tide turned to describing rays of light – caring souls bringing meals, cleaning their homes, going to the grocery store - seemingly trivial offerings which created islands of solace and hopefulness.  Through the power of Divine Providence, I had encouraged others to find light in moments of darkness.

“A man’s steps are made firm by G-d.  When a Jew arrives at a particular place, this is for the purpose of doing a mitzvah” (HaYom Yom 10 Tammuz). Two years ago, through Divine Providence, I met a Jewish man and his wife, Eugene and Roz Snyder.  They were referred to me in desperation struggling with emotional upheaval caused by Eugene’s highly malignant brain tumor.  My Chassidic education was the best therapeutic bond I had with them.  I used the concept of mine and their "mitzvahs” to help them find light during their dark days.  When they aborted a trip to Israel due to his failing health, I put notes in the Western Wall for them.  I gave them a beautiful pottery pomegranate from the Jerusalem shuk as a symbol of the 613 mitzvoth - their tears of joy radiated light. I brought matzah from Israel, symbolizing “the bread of healing.” We read "Chicken Soup to Warm the Neshamah" (Burston & Burston, 2003).  Eugene shared how he toiled on a granddaughter’s Bat Mitzvah speech far in advance, knowing he may be too ill to communicate his words of joy and admiration.  Even when he deteriorated to not walking or talking, he refused to succumb to the darkness, finding sources of light through his faith and family (wife, children, and grandchildren).  He spread light to my life and his Jewish community, because of his legacy of mentshlekhkeyt.  It seems fitting to dedicate this essay on light to one who shed so much light and goodness.

"Making a good start sets off a good chain of reaction for continued success" (Lubavitcher Rebbe, Letter from 27th Elul, 5717).  I wanted to extend my new-found Chabad principles into other venues, such as my professional writings.  In a book on psychotherapy for families, I created a case study about two sisters, one of whom had a stroke (Klonoff, 2014).  I portrayed how the Chabad-Lubavitch community fortified them through acts of kindness.  This in turn galvanized them to perform mitzvahs for others.  I hoped to indelibly spread the message of light overcoming darkness.


Despite my personal, professional, and spiritual growth, I know my mission in revealing light is unending.  Chassidus continues to guide me to unearth the light and dispel darkness wherever and whenever I can, starting with small glimmers.  I remind myself often that "The next step is ours.  By doing one more good deed....we will tip the scale, the light of knowledge and the goodness of G-d" (Jacobson, 2004, p. 279).