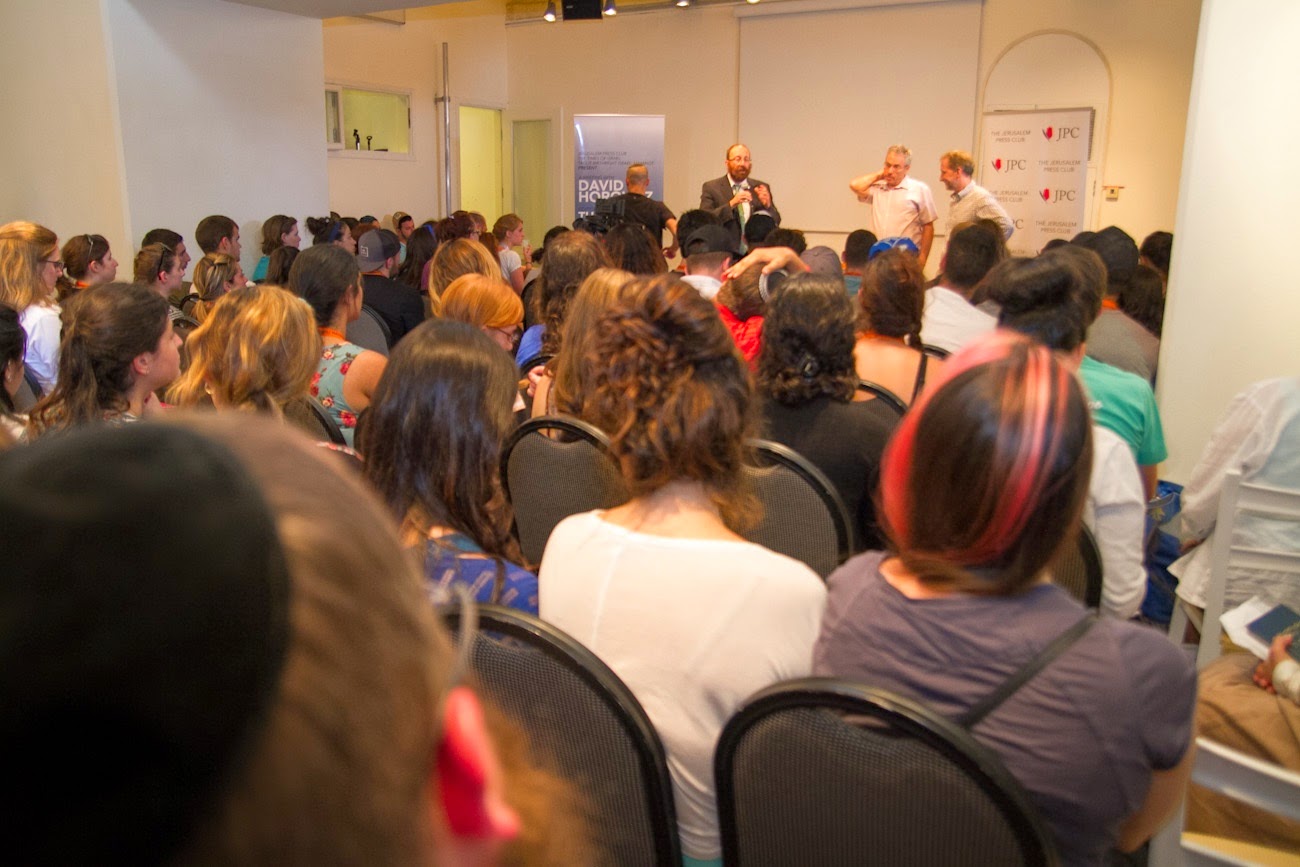 Mr. David Horovitz, founder and editor of The Times of Israel online magazine, discussed the reality of the conflict, shining a light on the protective measures taken by Israel to shield its citizens and spoke about the outrageous and frustrating criticism by the global community and media.

The lecture was dedicated in loving memory of Myra Kraft z”l, on the occasion of her third yahrzeit. She was a friend to the Gestetner family, a generous philanthropist supporting causes all over the globe; she had a deep enthusiasm for Israel and was devoted to women’s rights and their education, including the Mayanot Women’s Learning Program.

Joining the large audience were Shluchim from West Hempstead New York, Rabbi Yossi and his wife Chaya Rachel Lieberman who were leading the Birthright group, as well as Rabbi Zalman Kravitzfrom Los Angeles.

The event was co-sponsored by the Jerusalem Press club and the Times of Israel and took place at the prestigious Jerusalem Press Club in the historic neighborhood of Yemin Moshe.

Rabbi Gestetner, Dean of Mayanot, introduced the event by saying, “we are all one family, it doesn’t matter where you are from, we are all in this together.”

Subsequently, Sarah Surowitz, a Birthright Participant from New Jersey and first time visitor to Israel, commented, “Those of us who have never been to Israel before, let alone visit a country in the midst of war, were able to actually understand how Israel is coping with the situation at hand.”

Mr. Horovitz gave a deeply insightful and pragmatic look at the conflict. He illuminated for many students and participants, how the conflict unfolded and the many possible ways it can continue to unfurl.

Echoing this sentiment, a current student at the Mayanot Women’s Learning Program, Julie Finke from Las Vegas stated, “These are scary times and people don’t understand that the right thing to do is to support the Israeli people in any way they can, that is the true meaning of Am Yisrael, to be one family.”

Mr. Horovitz touched on the misrepresentation of the conflict and various issues relating to the current turmoil. He mapped out past peace treaties with Jordan and Egypt, and examined this new era of delegitimizing Israel and the danger extremist Muslim groups pose to Israel and the global community at large.

Chaya Rachel commented after the briefing, “David Horovitz took a very complicated conflict and presented it in a way that everyone could understand. He was very clear, informative and even humorous and it left people with something profound to think about.”

In the wake of the conflict however, Mr. Horovitz didn’t fail to mention Israel’s many accomplishments. What an incredible country Israel and its people are, having revived an ancient language, with dozens of Israeli Nobel prizes, amazing technological advancements and brainpower, and the first to arrive in Haiti and Gaza with a field hospital. Can you imagine, he said, “How Israel would thrive if we didn’t have to worry about trying to survive.”

Rabbi Gestetner concluded the event by thanking the staff at the Jerusalem Press Club, and the Times of Israel, and said a prayer for the safety and security of the citizens of Israel and the soldiers on the frontline.
Check out the link to the Lecture here: https://www.youtube.com/watch?v=lcXYN6-UwHw 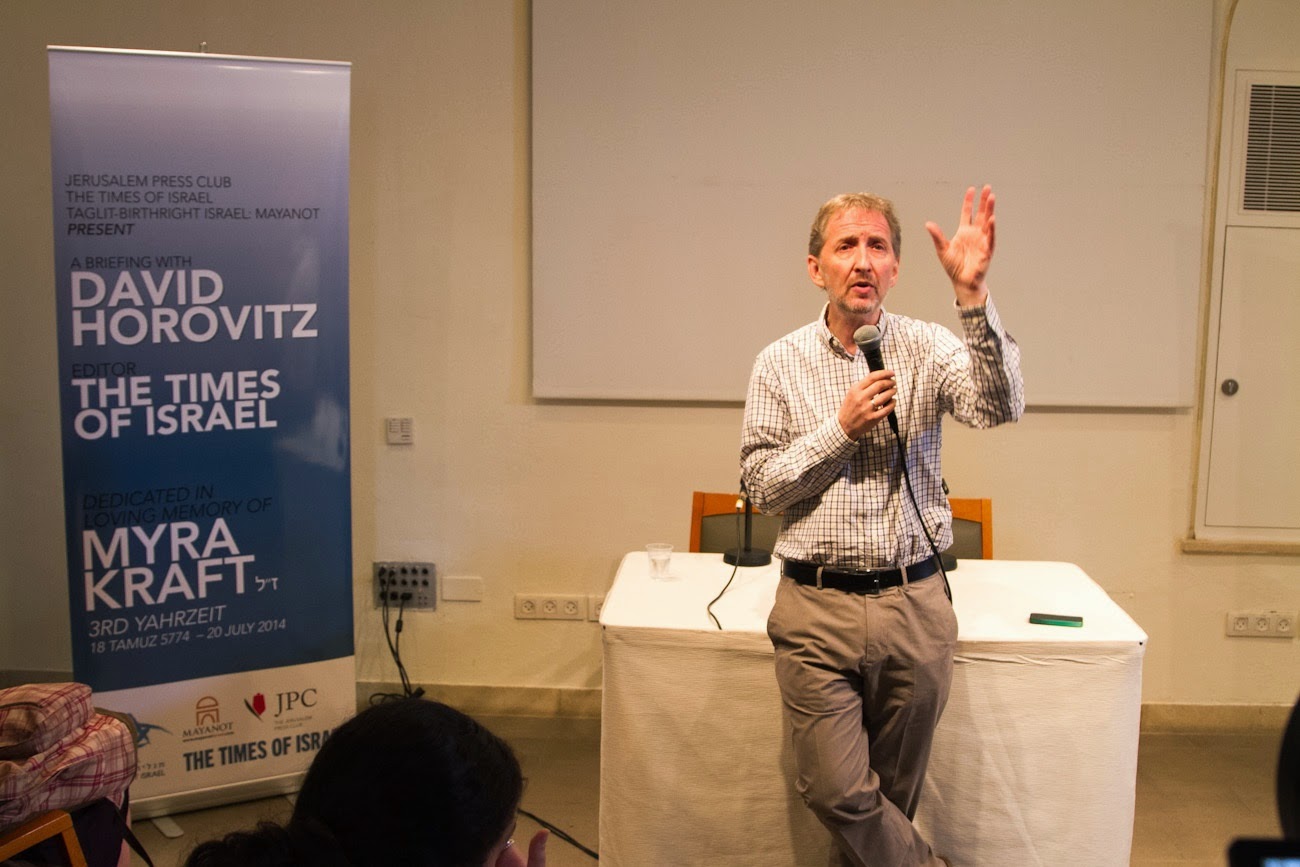 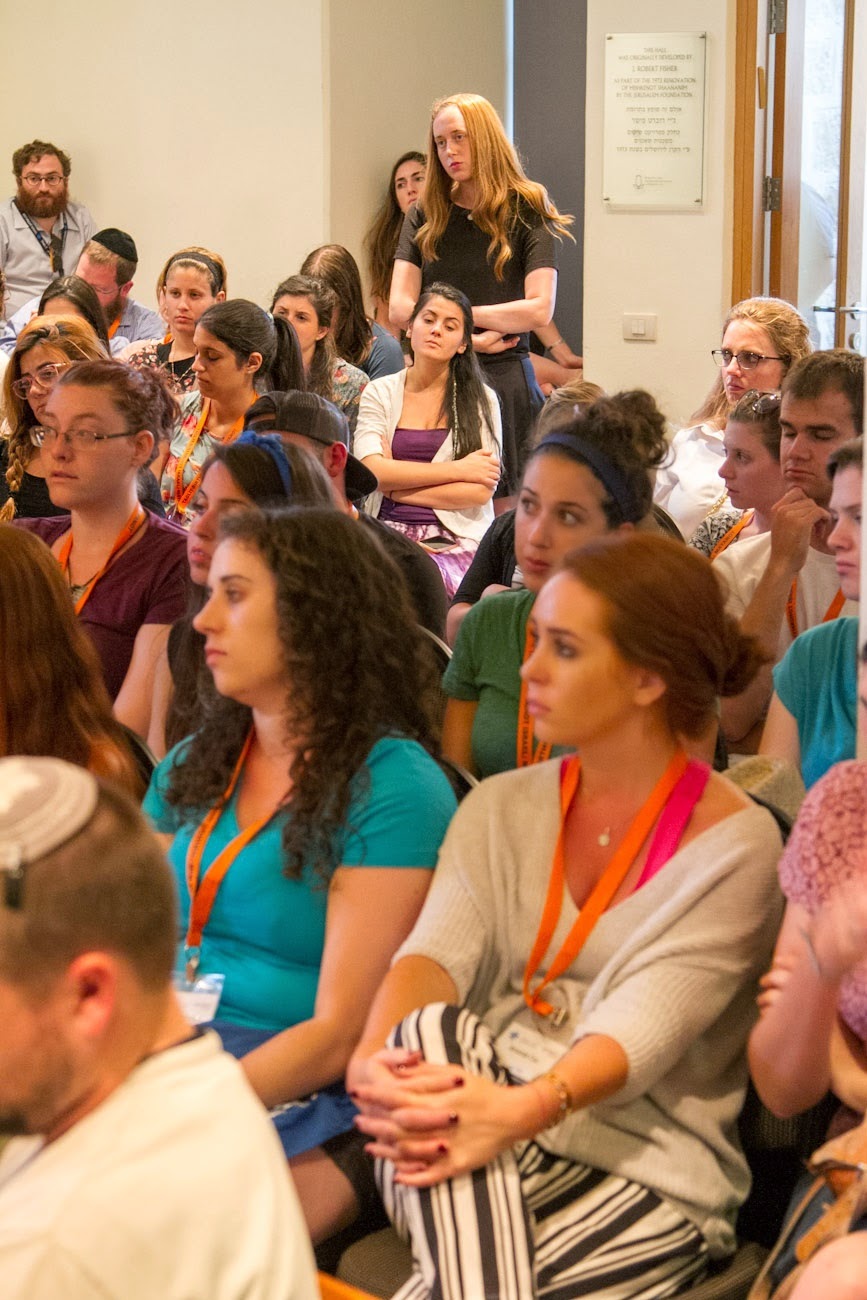 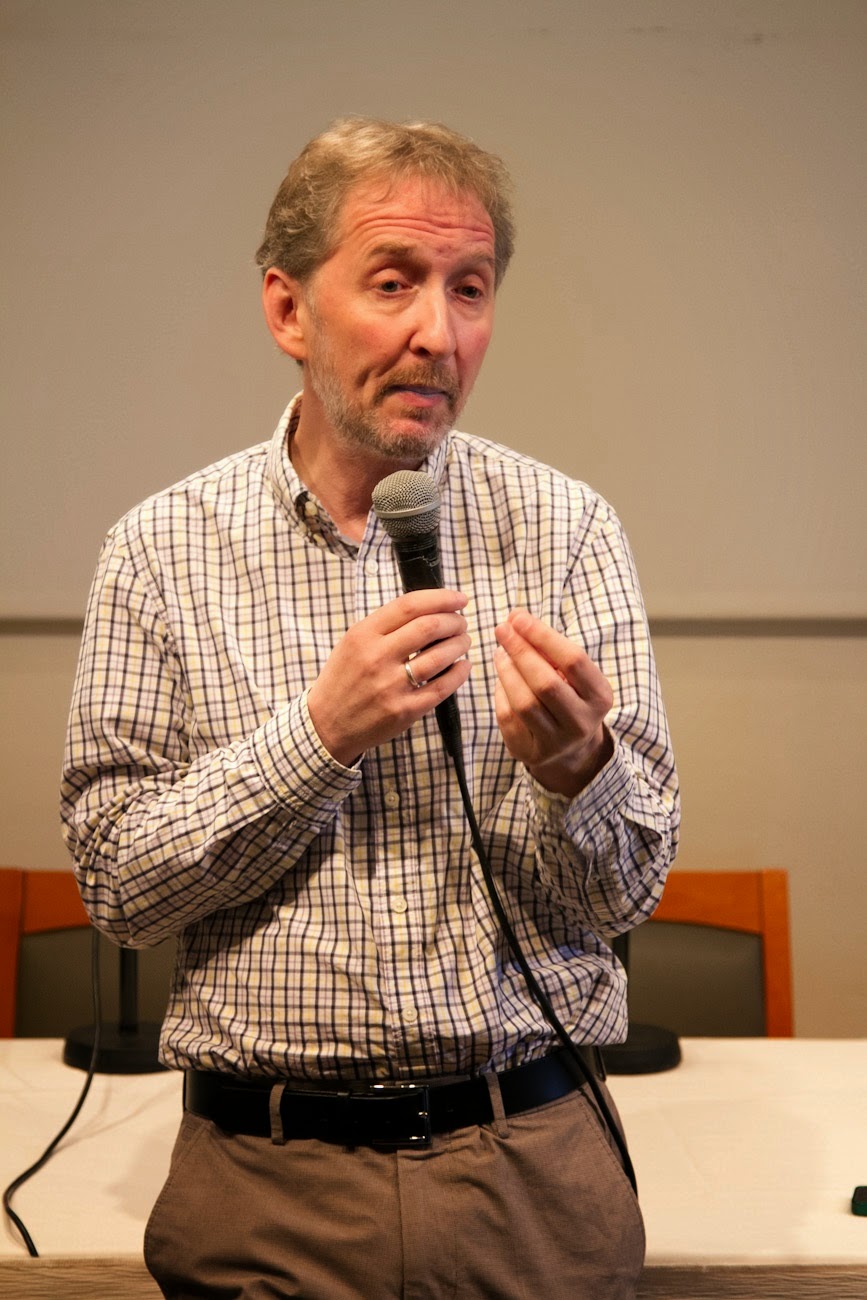 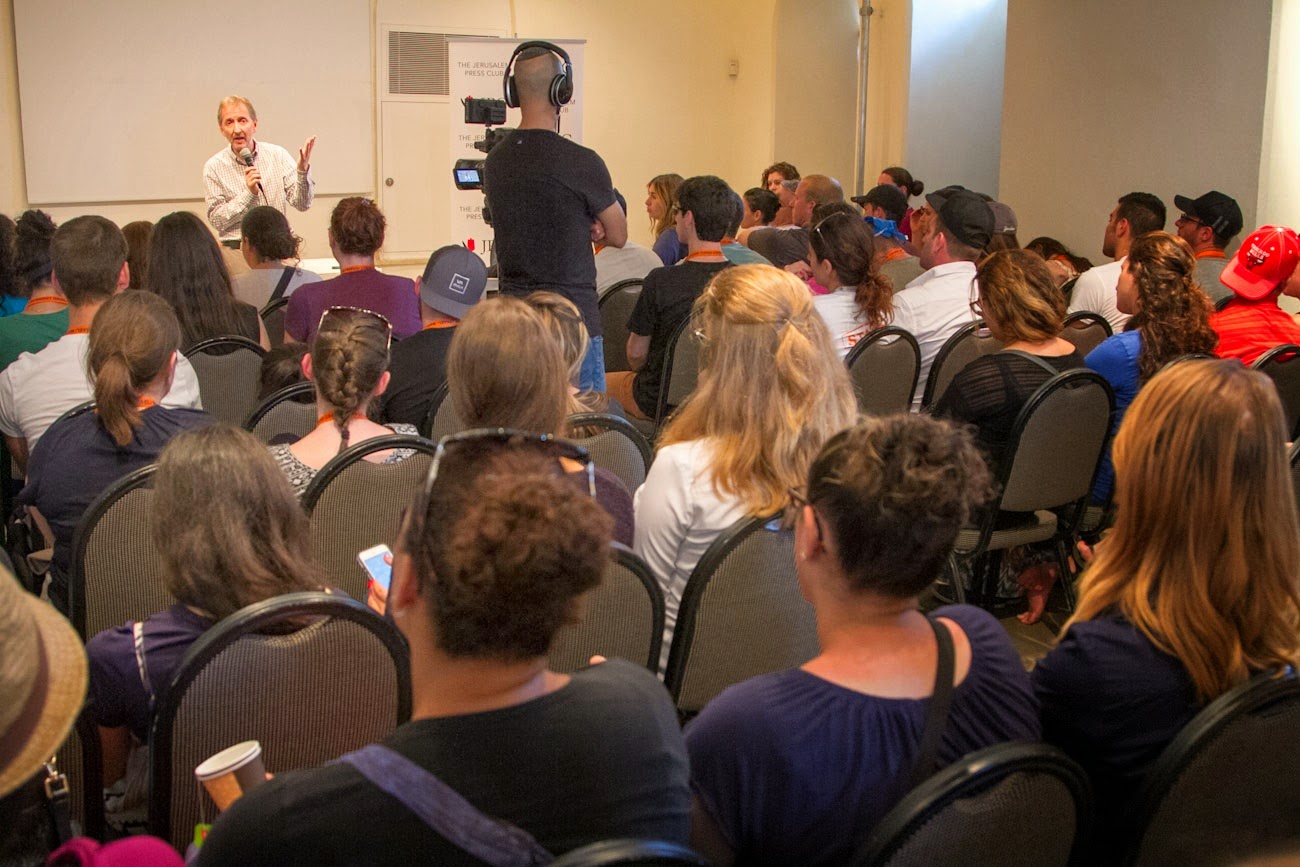