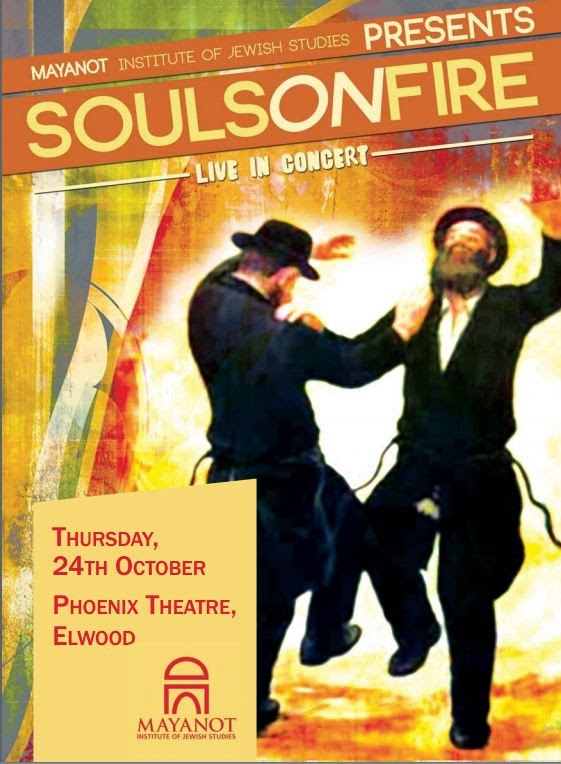 Seder niggunim may never be the same again.
Before a full house at the Phoenix Theatre in Melbourne (Thursday night, 24 October 2013), a talented group of musicians and others delighted the crowd with an interpretation of a series of Chassidic nigunim, in support of Mayanot Institute in Israel.

It was apparent early that this would be a special night indeed. The stage was setup with a farbrengen table to one side, and a giant empty canvas to the other.

Before each of the niggunim, a short spoken word piece was delivered by David Werdiger and young local mashpi’im R’ Yirmi Caspi and Rabbi Dovid Tsap, to introduce and set the mood.

Throughout the concert, local Sydney artist David Asher Brook worked frenetically to deliver a masterpiece, inspired by the music.

From niggun sholosh tenuos to a magnificent finale of rachamono d’onei featuring all the performers, the interpretations were intense, innovative, and had the audience enraptured. The lechatchila ariber niggun of the Rebbe Maharash was a highlight, with a mandolin and bass clarinet prelude, then switching to high voltage electric guitar.

Brainchild of local musician Moshe Feiglin, together with his own band members and a selection of other guest performers (Naom Sender, Yoni Ryder and Zalman Werdiger), this production has brought chassidishe niggunum to a broad audience, and is sure to inspire others to adapt and renew.

Rabbi Shlomo Gestetner, dean of Mayanot, presented a video about the outstanding work of Mayanot and acknowledged local and international supporters as they launched an appeal for their much needed expansion. It is intended that the work of art from David Brook will be auctioned online in the next few months with proceeds to go to Mayanot.