Adults Follow in the Footsteps of Their Kids, Experiencing Israel Firsthand

In the midst of war, Israel groups like Mayanot craft positive plans for the fall

While some summer programs in Israel are on hold during the Gaza conflict, others are going full-speed-ahead, with staff continuing to craft plans and itineraries for the fall, making sure that future experiences match successful ones of the past.
The new Legacy program by Mayanot, a Chabad-affiliated organization inJerusalem, for example, is designed to provide adults with an experience similar to those their children experienced on their Israel trips. The eight-day adventure is open to anyone interested in going to Israel, regardless of any previous travels there by the participant or their family members. While it is geared to the parents of young adults who have recently visited Israel for the first time, it’s open to Jewish adults of all ages and backgrounds.
The program includes extensive touring in Israel, to places like Safed in the north and the Dead Sea in the south; interactive discussions and a behind-the-scenes look at Israeli politics; a camel ride in the desert and a Jeep tour in the Golan; Shabbat in Jerusalem; and everyday Israeli experiences, like buying snacks at an open-air market. Kosher food is served at tour-sponsored activities, and there is no travel on Shabbat. The groups include a rabbi from back home.
Rabbi Pinny Andrusier has led other trips to Israel, but said nothing tops his most recent one with Mayanot Legacy. In June, a group of 15 from his South Florida community took part in the program, which is geared specifically for adults. The Florida group joined 20 other individuals from cities such as New York, Boston and Atlanta.
Andrusier, co-director of Chabad Lubavitch of Southwest Broward in Cooper City, Fla., and his wife, Gitty, co-director, served as the group’s spiritual leaders. 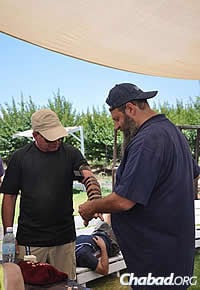 Andrusier wraps tefillin with participant Steven Sztab
According to the rabbi, the attendees were all “first-timers” in Israel, with very limited exposure to Jewish history, custom and observance. At first, Andrusier thought they would be wary having a rabbi with them; most of the attendees’ other travels included locales like Italy, Ireland and Costa Rica. So he was impressed by how the group embraced both him and the overall experience—a distinctly Jewish one—“with open arms.”

Cory Browarnik from Fort Lauderdale, Fla., said it was “a life-changing trip—insightful, informative, even magical. Through the knowledge of our tour guide and Rabbi Pinny, I felt like I really got to live and breathe Israel, both past and present. I know I will stay forever connected.”

During the trip, one woman asked if she could become a bat mitzvah; about a dozen other participants wanted to as well. The rabbi replied that he had to think about the request and what to do. While at the Western Wall in Jerusalem—near the flagpole where men and women do not have to separate—he explained to the group that the word mitzvah means “connection.”
He went on to explain that they all arrived five days earlier as strangers and now felt connected to one another, to the Jewish people, to Israel, to the place they were standing—where the Beit Hamikdash, the Holy Temple, once stood—and, most importantly, to G‑d. 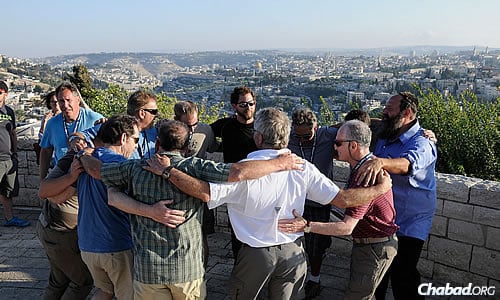 Dancing during a visit to Jerusalem, a significant part of the program for the group of “first-timers” to Israel.

“You are really bat mitzvahed in the most meaningful sense,” he said. “So how do we celebrate that? By doing mitzvahs.”
Therefore, he encouraged men to put on tefillin and women to light Shabbat candles. The group also did some volunteer work at Pantry Packers, a food-distribution project of the social-service agency Colel Chabad. “It means taking it upon yourselves to do mitzvahs,” said Andrusier.
“It was a powerful moment,” he added, and the group was “very active, very into it.” He also led 31 people to an unplanned, middle-of-the-night trip to the Western Wall, the Kotel.
While wandering through the Jewish Quarter, he told the group that they would be back the next day for a little shopping. One of the vendors overheard him and blurted out: “Why not today?”
The rabbi loved that response. “That’s right; why not today? We’re always pushing things off,” he said. “Whether it’s doing mitzvahs or asking for Moshiach—why not today?”
That became the group’s slogan on T-shirts and in the messages they later exchanged. They even created a Facebook page, continuing to communicate regularly.
“Everybody gelled. They’re the same age, same open minds. Really not one glitch in the whole trip,” he said. “The participants were just blown away—so many are taking on mitzvahs.” 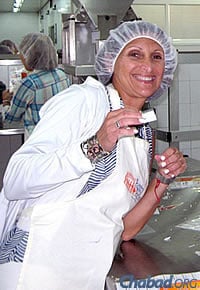 On the schedule was some volunteer work, helping box up food for the needy at Colel Chabad’s Pantry Packers.
In fact, Andrusier said they told him: “We never had a rabbi; you are our rabbi.”

The next trip is scheduled for October, with three more in the works for 2015.
“Mayanot Legacy is a way to give parents a taste of what their kids had, exposing another generation to both Israel and their Jewish heritage,” explained Tsiona Mann David of Israel Maven, the tour company that handles the land arrangements during the tour.
Barbara Katz from Cooper City, Fla., said “our trip is something I will remember and talk about for the rest of my life. It was absolutely perfect! I laughed, I cried, I made friends for life, and not to mention ate my way through Israel. There really are no words to describe how much this trip meant to me other than to say, I would love to do it all again tomorrow.”
Lori Green, also a resident of Cooper City, also had a lot to add. “Mitch and I started the journey with a group of people and quickly became ‘family.’ Having both a guide and spiritual leader provided a tremendous amount of insight into the places we toured, and pulled everything we saw together to create a better understanding of things we heard about growing up or while celebrating or observing holidays.” 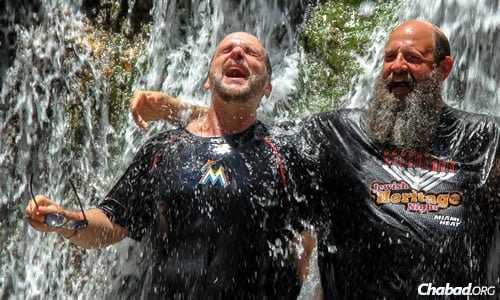 Mayanot participant Mitch Green and the rabbi cool off at Ein Gedi in the south of Israel.

Another participant was Debby Eisinger, who served as former mayor of Cooper City for eight years and before that was a city commissioner. “Connecting with our heritage, engaging in lessons about our history and culture, and seeing the land has opened our minds and hearts to the beauty of Israel,” she said.
“Without question, this trip was so exceptionally remarkable because of the wonderful longtime friends and new friends who shared this journey with us,” continued Eisinger. “There was a special chemistry that clicked from the moment the tour began and continued throughout the trip. That last evening, as we sat on the beach of Tel Aviv, there was a true sincerity and genuine passion in the parting comments shared by each member of the group.”
For more information, go to www.mayanotlegacy.com. 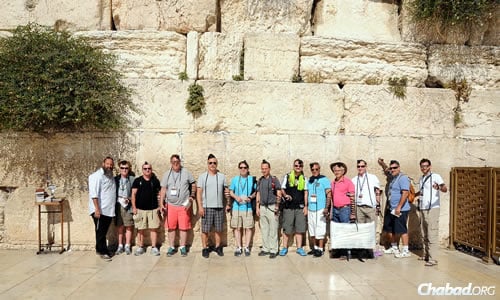 Taking time to pray at Western Wall in Jerusalem 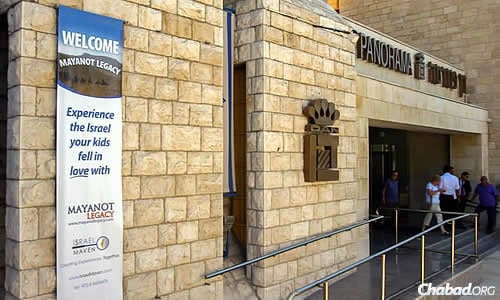