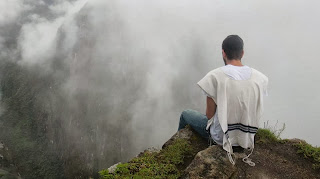 And so it begins…

And now I'm here. in Israel. in Mayanot. In Jerusalem. Thank g-d!
But it wasn’t easy getting here. On Sunday the 8th of August I drove to Chicago with my sister, Hela and girlfriend, Jenna. That evening we went out for pizza. Joining us were Hela’s room-mates and my brother, Amir. We went to a kosher pizza place, but the service was sub par at best and there wasn’t any A/C. The food took forever to come out, so they tried to appease us by bringing out guac and chips. Long story short – I got the worst food poisoning I have ever gotten in my life. Albeit everyone said the guac tasted weird…I nevertheless kept on eating it…I guess it served me right.
The food poisoning made my traveling very difficult and once I finally landed in Israel after what seemed like an eternity on the plane, my cousin Inbal picked me up from the airport and I stayed that night at her house. In the morning she dropped me off at Mayanot and that’s where I am now!
My first day in the Yeshiva (Thursday) was spent in bed because I was still recuperating. Friday evening was also recuperating, but then right before Friday evening which was Shabbat AND Yom Kippur, I started to feel better, bh. Yom Kippur in the yeshiva was quite an experience. After the prayers Friday night I walked to the Kotel with Daniel Raskin. It was so cool to see so many Jews at the Kotel. Jews in long black coats, with curly payos, black hats, and majestic beards, sitting right next to a Jew wearing orange nikes, a pink mohawk and basketball shorts. Achdus!
It was my first time being at the Kotel in four years. When you return to a place you haven’t been to in quite a long time, you are forced to think about how you have grown and changed since that previous time. I realized I have morphed into a more mature version of who I was, with a better refined identity. I’m excited for all the growth time enables.
Saturday was all about davening and connecting. The whole day was spent in the Mayanot Bais Midrash. The fast was tough for me, but sometimes the lack of physicality enables the spiritual to express itself in a purer way.
That evening we went to a Farbrengen at a man named Uri Kaploons house. He is an old rabbi, and prolific author, who used to be in the IDF and did reserves up until recently. He spoke about keeping the things we learned from Yom Kippur throughout the year, and not letting the inspiration dwindle into the past. His eyes shine with life and he is HILARIOUS! its amazing how he was able to connect with people 50 years his junior. I’ll be seeing much more of him throughout the year, I'm sure.
The yeshiva is very nice, and the rooming situation is much better than I anticipated. The food is delicious (i know, right?!) and the location couldn’t be better. I’m a 7 minute walk from the Israeli Shuk (market place), 15 minute walk from Ben Yehuda Street and a half hour from the Kotel.
I haven’t gone to any classes yet because the Yeshiva is on break now (lucky me!) so for now I’m just walking the streets, getting to know the guys better, meeting up with old friends, learning chevrusa style and eating good KOSHER food.
Today I’m meeting up with mordi to learn some Gemara, and then in the evening I’m going to the Lifta reserve  – a nature reserve in Jerusalem.

Stay tuned next week when Avi explores the different Hasidic communities in Jerusalem.