Coloring in the Torah one Daf at a Time: The Rise of Talmud Learning in Female Seminaries 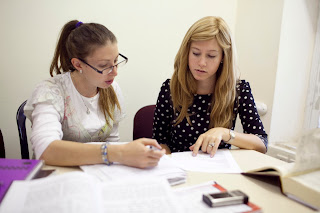 When I was little, my parents used to schlep me and my younger sisters to the Dallas Museum of Art. We would roam the halls examining paintings and objects, some no more than a square canvas painted orange and others containing so much action that one could become over stimulated. While I remember admiring some of the charcoal art pieces done in black and white I could not help but think that something was missing. Johannes Itten, a Swiss expressionist painter in the early 1900’s, once proclaimed that “color is life; for a world without colors appears to us as dead.” Though a painting of a house devoid of color still possesses the structure of a house, it is the color that helps the observer grasp the true beauty of the building and the artist’s intent. The same can be said for the Torah, which while it gives us the structure of Jewish life, often does not provide enough description. It is here that Talmud steps in, bringing a palate of color to the black and white scroll, helping to fill in the void, to ascertain Hashem’s intent; bringing the Torah to life.

The concept of women and Talmud is a relatively new phenomenon sweeping the Jewish world; especially within Orthodox circles where Talmudic study is highly regarded as essential to understanding how to follow mitzvot. Before I graduated from university I had spent many hours and late nights looking at multiple seminaries as I tried to select one that would suit my needs. Having been brought up in a Conservadox and egalitarian household I was very naïve in believing that Talmud was taught to both males and females equally. As I soon found out, my choices were limited if I wanted to learn Talmud in a single sex setting. Being the first generation after the Second Wave of feminism in the 1960’s, I had always found just about every door open to me, for the first time in my life I appeared to have hit a ceiling.

The decision and argument over whether or not to teach women Talmud, or Torah from text at all, has hinged greatly on the intellectual capacity and knowledge of women. Maimonides proclaimed in Hilchot Talmud Torah that uneducated women would not be able to understand the arguments brought forth by Talmudic sages. While Judaism was considered a very progressive religion Jews up until the 19th century, with few exceptions such as Bruria, education for women was not seen as necessity. As time went on and women began to make great strides in the educated world their Torah study did not reflect where they were on an intellectual level. By the 20th century many famous rabbis like Zalman Sorotzkin, Joseph Soloveitchik, and Menachem Mendel Schneerson came out saying that a woman’s secular education needed to be on par with her Jewish education. This move ushered in a new reform, pushing Talmud learning into schools all around the world. Including the one I currently attend.

The Mayanot Institute of Jewish Studies is an all girls yeshiva located in Jerusalem and associated with the Chabad-Lubavitch movement. It is here that I have honed in on, and am still honing in on, the ability to decipher a tractate in Talmud. By understanding even the basics, what a page in the Talmud looks like and how to look for answers, I feel more confident in my own ability to look up answers to questions. So you have a question concerning the type of wick one uses on Hanukkah and want to learn more; open up the Talmud. Did you ever want to delve into the laws of borrowing, to determine under what circumstances a borrower is responsible? Look in Bava Matzia, daf lamed-vav. While it will be very unlikely that I will ever lend my cow to a friend who lends it to his friend and then his friend takes the cow to a toxic pond where is passes away, I find myself learning how to learn. The logic and brainpower that goes into learning even ten lines on a page is absolutely mind blowing. After having graduates summa cum laude from my university this past year I thought I had already learned how to learn on a critical level; I was wrong.

When a painter wants to fill in the black and white picture he has just created, with color, he begins to mix and prepare the colors to fit the canvas. Women today are beginning to fill in their own homes, their own lives, with these colors. Mayanot Institute for Jewish Studies acknowledges this intellectual gap and the need to fill it in the 21st century. Jewish women today are neurosurgeons, politicians, and professors and their Jewish education should be on par with their secular one. Through the learning of Talmud women are better able to understand the choices and actions they make in their own lives without having to consult Google or their husband every time. They are able to select their own paints, bringing the canvas to life.